A while ago we were discussing Ryan Freel in the comments section of one of our posts.  Here’s the excerpt:

Ryan Freel is terrible, plus we would be stopping him from his possible record of playing for the most teams in a single season ever

“We would be stopping [Ryan Freel] from his possible record of failing with the most teams in a single season ever.”

So Ryan failed again.  If he latches on with one more franchise he has a shot at the title but I doubt that will happen today.  He really looks like a dick now so I hate to rub it in…nah, that’s not true, that’s what we’re here for.  To kick him while he’s down.

A decade or so of losing teams.  Man am I glad to be off the O’s and headed to the Cubs.  I’m overwhelmed with joy.

Also, Farney keeps farting in my cereal bowl and he needs to cut it out.

Get ready for the grittiest damn ball player you’ve ever seen Chicago!  Eckstien didn’t play in Chicago did he?

I hear Chicago has a better craigslist anyway.

The Cubs haven’t won a world series since 1908!  Man, they have no idea how to run a club there.  I’m lucky I got out.  Kansas City here I come!

Get ready for the grittiest damn ball player you’ve ever seen Kansas City!

Also, Farney has moved from farting in my cereal to drawing on my face at night with a permanent marker.  And people wonder why I drink so much!

~More than a Freeling

George Brett is a psycho.  Farney and him couldn’t get along so I’m out.  They’re saying they DFA’d me but I tell you what…I walked out.  I was legitimately concerned for my life there.

You can only get threatened by George so many times before you just have to make a change.

I hear Texas is nice though so I’m glad I got picked up by a legitimate contender.

Texas get ready for the grittiest damn ball player you’ve ever seen.  Playoffs here we come!

~You Don’t Know How It Freels

What the hell!  Two fucking days!  I didn’t even make it to Texas?  Oklahoma was just supposed to be a rest stop and I already got released.

Farney is not making it any easier by calling me a loser every five seconds or so.

All this moving would sure be a lot easier if I hadn’t had the Orioles equipment bag burned.

Come out and join us against the dreaded MFY.

It seems fitting that yesterday I was reading through the archives of FJM and then Peter Schmuck writes something that would have Ken Tremendous and Dak losing their minds.

Painful collapses have become a habit for the Orioles, and this one was another illustration of something that’s been obvious for months. These guys just don’t know how to win, because none of them ever have.

Are you are saying that the players on the current roster, have never been a part of a winning team in all of their years in baseball?  Not even little league, high school, college, or minor league teams?

Or did you mean that after recording two outs in the ninth, Jim Johnson said to himself, “Shit, what do I do now?  Groove a pitch to let the other team take the lead?  That sounds right.”  Yet, prior to tonight, he was 4-4 in save opportunities since taking over the job from Sherrill.  I know, small sample size, but still.

They do know how to win.  There’s not a secret to it.  You score more runs than the other team.  They’re just not as good as the teams they’re playing.  That makes it hard to win.

Did the Rays have a bunch of “winners” on their team when they made it to the World Series last year?  Nope…they had good pitching, good defense, and good hitting.

They also didn’t run themselves out of a lot of innings…while I’m thinking about it, the argument raging about firing Juan Samuel over at OH is ludicrous too.

When Pie tagged and tried to make it to third…it was retarded.

When Brian forgot how many outs there were and ran home…it was retarded.

When Huff got picked off by the “fake to third-throw to first move”…it was FUCKING retarded!  I’ve never, ever, seen that work.

So, Juan Samuel called all the players on the team retarded in the newspaper.   I for one am for it.

People are calling him an awful coach.  I personally don’t think the third or first base coach has a significant impact on the game.  Unless your Tom “Windmill” Trebelhorn.

People are claiming that the team doesn’t respect Trembley because he never played the game.  Well Juan Samuel did play the game.  And he was a beast on the basepaths, so there is credibility there.  Say what you will about his coaching/teaching abilities, there is no denying that Juan could tear it up, running the bases.

People are saying that he shouldn’t have done it in the papers.  Our base running has been a joke all year.  Even Rolling Stone ragged on us.  Do you think that Juan hasn’t been trying to hammer it into these idiots?  I’m ready for some of these players to get publicly embarrassed.

A) They’re grown-ass men and they don’t need to be coddled like 5 year olds.

B)  They are professionals who aren’t performing their job to the highest level.

We could use a little accountability in the clubhouse.

Finally, I think a few of us are headed to the game tonight.  Keep an eye out in the right field bleachers for some fans with their heads in their hands…that’ll be us.  It’s getting hard to watch.

As some of our readers may know, there is a creature in Orioles lore known as the Magilahuff. It was a three-headed monster that played first base for the Orioles early this decade.

The first head, Gibbons, was defeated when he was ostracized from the team for his utter lack of production after quitting steroids.

The second head, Millar, felt he could help the Blue Jays increase their pop-out number. 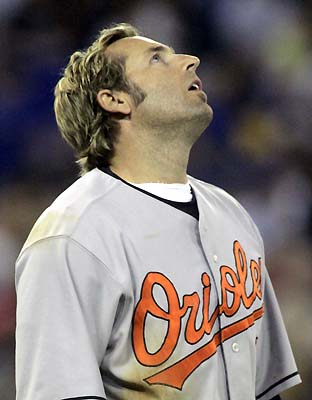 We learned today that the final head of that beast was shipped out to Detroit.

I’m probably as excited about this trade as Huff was to get that home run off Joba.

As Tom Ludlow put it earlier, “We traded the corpse of Huff for a living person, so it was a good trade.”

He’s probably as excited to be going to Detroit as he was to come to Baltimore. After all, I hear Detroit is beautiful these days. 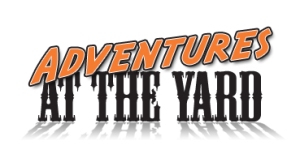 If you remember a few days ago I posted the picture I saw in Rolling Stone about how terrible our base running is.   For those who haven’t, and that’s most of you judging by our site traffic numbers lately, here you go.

Well last night Brian Roberts did exactly what Ashanti did on the base path.  With 1 out he sprinted to home on a lazy fly ball and was doubled up at second, effectively running us out of the inning.  We won though, so it didn’t end up mattering too much but holy shit that’s ridiculous.

There was one difference between Ashanti’s base running mistake and Brian’s.

She’s a singer and he’s A PROFESSIONAL BASEBALL PLAYER!

Last night, I was embarrassed.  It’s a good damn thing no one really watches the O’s anymore.

Filed under Adventures at The Yard

Adventures Away from the Yard: Fenway Park

It’s been over 2 weeks now and I’m just now getting to the update about my trip to Fenway Park.

Suffice it to say that the trip could have been better.

We hopped on the train from somewhere in Boston to get to Fenway.  We arrived and they have a sort of Pickles-esque set up with a few bars around the place where people can meet up and tell stories about how they became Red Sox fans.  I’m going to withhold further comment because unlike a Red Sox game in any other stadium but Boston or NY, I am confident that most of them are actual fans.

We met some other O’s fans and they came to dinner with us.  I told them I’d post a picture so here it is: 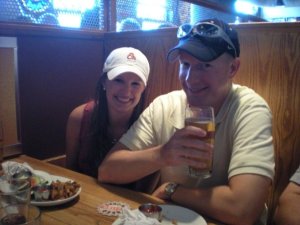 They were nice and they were O’s fans so that was cool too.

The place we went had amazing food.  But I did find out that most Bostonians are sissies and I judge this based on the beer they drank.

Blueberry and Watermelon beer?  Nancies.  There wasn’t a Natty Boh to be seen for miles.

Anyway we made our way over to the stadium and it was packed.  The seats were super close together and a lot of them were obstructed view seats because of the damn pillars.

I only had one run-in with fan.  He happened to be a Napoleonic fellow wearing a Pedroia t-shirt.  I don’t think he smiled during the game and I’m pretty sure he was about 5 seconds from an aneurysm for most of it too.  The vein on his forehead was really pulsating.  The fans there went ape-shit for every routine play, it was kind of pathetic.  When I would clap modestly for the Orioles, the following play (when predictably that play was rendered moot), the guy would stand up, turn around and clap in my face.

First off, if you are 5’5” and 12olbs, don’t think that you are going to intimidate me.  I subsequently laughed hysterically until the guy turned around.  Second, you’re supposed to win.

Let me re-iterate that:  You’re supposed to win.  Why are you taking it so serious?  Why do you clap at a routine catch by

Jacoby in center?  You’re supposed to beat the snot out of us.  You spend more than Scrooge McDuck and we’ve not had a winning season is 10 11 seasons.

Anyway, after the game we went down to the grounds keepers dressing room (the guy we were with was a grounds keeper there for a bunch of years so he still had some friends there).  Turns out their dressing room was right next to the visitors clubhouse.  I saw Rich Hill talking with his family (probably about not pitching anymore).  I saw Ty Wigginton walking towards the bus hotdog stand.  I saw Zaun walk out and forget where he was (Alzheimer’s).  And, I saw Trembley giving the Crow travel advice.

It was worth the trip to say I’d been there but I’d rather watch a game at good old OPACY any day of the week.

I imagine we will be at a few games this home stand, especially Bergy T-shirt night so we hope to see you at the yard.

Filed under Adventures AWAY from the Yard

It seems everywhere you look these days the Orioles are getting crapped on.  Other than the excitement of watching our busload of rookies get their shot, this season has been pretty soul-crushing.  Shame on me for letting the Orioles PR machine hype me up about another dreadful season.

I have to draw the line though, when I see things like this in my latest issue of Rolling Stone: 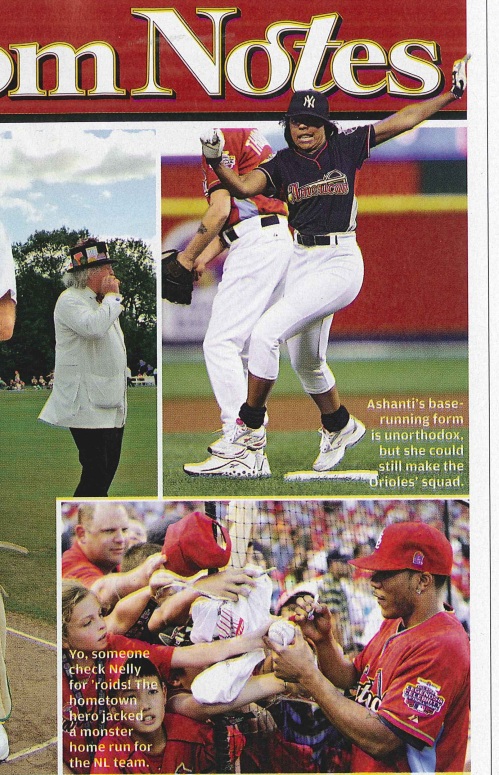 Did you see the video of her baserunning?

In all honesty though, I really can’t argue that much.  Obviously, Ashanti couldn’t really play for the Orioles.  We all know she can’t hit the curve and her splits against lefties are horrible.  I only really have one thing to say to the base running knock…touche.